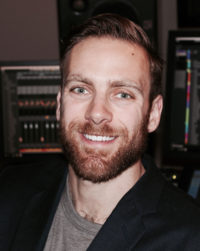 Brandon Campbell is a composer for film, television, and video games. He began his career scoring student films at the University of Rochester, while studying for his BAs in Music Composition and Economics. During his school breaks he interned at Hans Zimmer’s Remote Control Productions.

After graduating Brandon returned to Remote Control where he began working for Ramin Djawadi, and quickly became his writing assistant. Over the years Brandon has had the opportunity to contribute to a variety of projects. Person of Interest, Game of Thrones, and Prison Break in television; Warcraft, The Great Wall, Dracula Untold in film; and the Gears of War 4 videogame. You can also hear his music on the YouTube series Storytellers. Most recently, Brandon completed the score for Legendary’s The Thinning.

Brandon lives in Los Angeles and his studio is located in Santa Monica at Remote Control Productions.